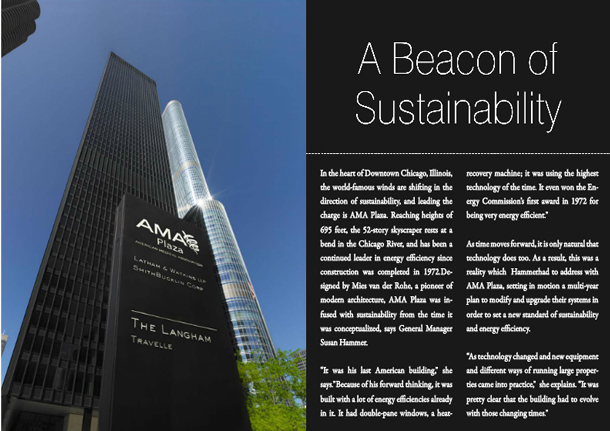 In the heart of Downtown Chicago, Illinois, the world-famous winds are shifting in the direction of sustainability, and leading the charge is AMA Plaza. Reaching heights of 695 feet, the 52-story skyscraper rests at a bend in the Chicago River, and has been a continued leader in energy efficiency since construction was completed in 1972.Designed by Mies van der Rohe, a pioneer of modern architecture, AMA Plaza was infused with sustainability from the time it was conceptualized, says General Manager Susan Hammer.

“It was his last American building,” she says.”Because of his forward thinking, it was built with a lot of energy efficiencies already in it. It had double-pane windows, a heat-recovery machine; it was using the highest technology of the time. It even won the Energy Commission’s first award in 1972 for being very energy efficient.”

As time moves forward, it is only natural that technology does too. As a result, this was a reality which Hammerhad to address with AMA Plaza, setting in motion a multi-year plan to modify and upgrade their systems in order to set a new standard of sustainability and energy efficiency.

“As technology changed and new equipment and different ways of running large properties came into practice,” she explains. “It was pretty clear that the building had to evolve with those changing times.”

Hammer explains that their plan was to retain the historic aesthetic of the architecture, while fully retrofitting the interiors to achieve their goal of being a leader in energy efficiency once again.

“Our basic premise was that it’s going to be a historic building on the outside,” she says. “But on the inside it’s going to be like a brand new building. And that’s exactly what we got from the mechanical systems, to the elevator modernization, to the lighting in the common areas and the toilet rooms. Everything was as good, if not better, than a brand new building.”

The strong focus on sustainability and seeking out energy efficiencies is not a new concept for AMA Plaza or its General Manager. In her more than 30 years of experience in property management, Hammer has worked at many buildings around Chicago, affirming that attention to the environment is something of a necessity in commercial real estate.

“This is not a new thing for us or for me personally for that matter,” she explains.”I think that part of my personality and my business sense, as well as the real estate industry in Chicago, is very environmentally conscious.”

“It has evolved from simply recycling,” she continues. “To if you do not have an energy or sustainability consciousness, you’re not going to be able to compete in the real estate world.”

Improvements made to AMA Plaza ranged from mechanical system and electrical distribution upgrades for the tenant office floors, to a redevelopment of the executive parking garage, a fire alarm retrofit, a new café and fitness center, and an elevator modernization. This also meant upgrading the ventilation and fan systems according to Susan.

“We switched our constant air volume system on most of the floors to a variable air volume system,” Hammer says.”This required modifying our fan systems to adapt to the changing air system.”

Their efforts also included an extensive lighting retrofit program, with over 400 internal and external light fixtures replaced with LEDs, anddimming controls. Enlisting the help of ESD Global to complete these upgrades and modifications, Hammer says their long-standing relationship with ESD was beneficial, as the existing knowledge of the engineers made the process more manageable.

“There are some engineers there that were in place at the time the building was built,” she continues.”So they have a very intimate knowledge of the existing conditions.”

Presented by the Illinois Sustainability Technology Center, AMA Plaza was named winners of the 2014 Illinois Governor’s Sustainability Award, for implementing innovative sustainability practices.
Hammer credits the hard work ofher team and their dedication to not just upgrading, but finding better ways to operate the building.

“It’s a reflection of the management team and the engineering team that’s in place at the building,” she says.”We’re always looking for ways to make our operation of the asset that we’re responsible for more marketable and less expensive to run.”

“We all worked together,” says Hammer . “We all had a voice in the design and the implementation of each of the aspects of the project. We met weekly to go over everything. It was very important to have a close relationship between all parties involved, from consultants and project managers, to the people who actually implemented the work – the mechanical and construction companies that helped us with that.”

Serving as a point of pride for AMA Plaza, the award lends itself to spotlighting additional sustainability efforts. “We’re the first multi-tenant building in the state to receive it,” Hammercontinues.”It really helped us to showcase everything that we’ve done, not only energy conservation, but we also set up a composting program.”

Beyond showcasing their latest programs to reduce their environmental impact, the award shed light on AMA Plaza’s tenants, who take pride in setting up shop in a building which shares their commitment to the environment.

“It helped us to outline our tenant and staff involvement, how everyone is involved,” explainsHammer .”Our tenants can show their clients the type of building they’ve chosen to lease space in.”

In addition to award success, AMA Plaza was declared a Chicago Landmark in 2008, joining the ranks of such iconic structures as Wrigley Field, the Chicago Theater, and the Tribune Tower. Not only regarded as a landmark in the city, the building was added to the National Register of Historic Places in the United States, which deems AMA Plaza a significant structure worthy of preservation.

As Hammer stated, ‘going green’ is a necessity to survive in the commercial real estate market in Chicago, and an integral aspect of attracting new tenants. In our society, environmental consciousness is a trait that clients value highly and as such, companies who seek their business must embody it in their practices. Offering a place of business that shares a commitment to continually striving towards efficiency, AMA Plaza also raises awareness for environment causes.

“As tenants were getting more sophisticated in their energy and sustainability requirements,” Susan says of the increasing demand for energy efficiency.”We were able to respond to that, and it became very easy for us to do so because of how sophisticated our systems and programs were at that time.”

“We also have been able to develop awareness with our other tenants,” she continues.”Whether it’s a law firm or other service oriented tenant or a technology based tenant. Now that they are using what the building has available as part of their corporate responsibility programs, it’s helped with not only their employment and recruitment needs, but also their clients.”

Looking towards the future of AMA Plaza, the goal is to continue towards a path of sustainability. A key part of that is educating their tenants and encouraging their involvement in the process. In addition, Hammer says they’re going to remain dedicated to seeking out the latest equipment and methods to reduce their impact on the environment

“We’re providing more information and education to our tenants, because the more they know, the more we feel they’ll participate,” she says.”Enhancing those tenant programs and education is a future goal.”
“You just have to keep up to date on the newest technologies and the newest ways of doing things,” Hammer continues.”To keep yourself smart and aware of what’s going on so that you’re ready to implement any new things that come along. It’s not going to end, the possibilities are boundless.

Through all of AMA Plaza’s success, the end goal remains the same: to make the world a better place. Hammer says that beyond the gratifying feeling of winning awards and being a leader in the Chicago real estate sector, they want to share their knowledge and support others in sustainability efforts.

“We’re trying to make a difference in the world,” she says.”So you don’t keep everything to yourself. You want to make the world better, the environment better, and that’s a community effort because it affects everybody on the planet.”

The 10 Runway Trends You’ll Be Wearing This Year

How to drive growth through customer support