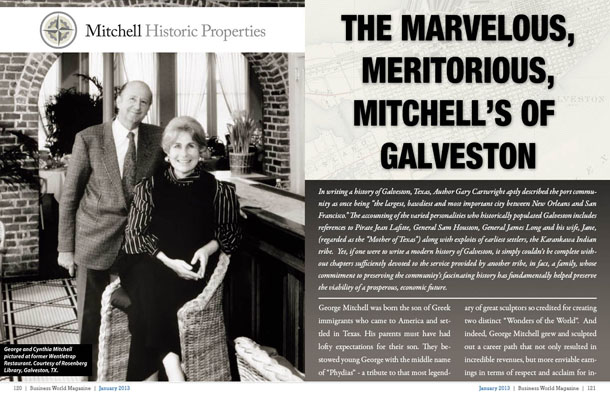 In writing a history of Galveston, Texas, Author Gary Cartwright aptly described the port community as once being “the largest, bawdiest and most important city between New Orleans and San Francisco.” The accounting of the varied personalities who historically populated Galveston includes references to Pirate Jean Lafitte, General Sam Houston, General James Long and his wife, Jane, (regarded as the “Mother of Texas”) along with exploits of earliest settlers, the Karankawa Indian tribe.  Yet, if one were to write a modern history of Galveston, it simply couldn’t be complete without chapters sufficiently devoted to the service provided by another tribe, in fact, a family, whose commitment to preserving the community’s fascinating history has fundamentally helped preserve the viability of a prosperous, economic future.

George Mitchell was born the son of Greek immigrants who came to America and settled in Texas. His parents must have had lofty expectations for their son. They bestowed young George with the middle name of “Phydias” – a tribute to that most legendary of great sculptors so credited for creating two distinct “Wonders of the World”.  And indeed, George Mitchell grew and sculpted out a career path that not only resulted in incredible revenues, but more enviable earnings in terms of respect and acclaim for industrial ingenuity. After establishing an energy development corporation, he went on to invent new techniques for extracting natural gas and oil from shale deposits. Those innovations ultimately led to commanding of respect, attention and imitation from the best and brightest of his industry that today recognize George Mitchell as “The Father of Fracking.” Yet, in Galveston, Texas, Mitchell commands esteem as a leading City Father, and something of a savior, but to be sure, such notoriety isn’t simply foisted on Mitchell, for this affection extends to his late wife, Cynthia, their children and an enterprise known as Mitchell Historic Properties. Mrs. Mitchell brought her own flair and style to the restoration projects and was widely regarded for her keen attention to detail.  To share that story, it seems fitting to note particular irony that Mitchell’s ancient namesake, Phidias, was never able to spare his greatest creations (the Parthenon or Statue of Zeus) from the ravages of time and natural disaster. But when it comes to protecting, preserving and promoting appreciation for structures deemed architecturally and historically significant, this may be George Phydias Mitchell’s greatest legacy.

As one of the oldest cities in a state that once existed as a nation unto itself, the history of Galveston is as rich and diverse as that of early guests of its famed Tremont Hotel, which throughout the 1800s, catered not only to the fabulously well-to-do, but to wild men akin to Buffalo Bill. In the heyday of its port operations, Galveston was the pivotal point by which the vast majority of all goods traveled to-and-fro the Southwestern United States, making it a focal point for other wild men in the form of pirates whose dubious exploits were so resistant to any constraint from authority that for a time, the area became known as “The Free State of Galveston.” The city, however wild or untamed, became a cultural-mecca in the late 1800’s. To review a list of those who have graced the stage of its Grand Opera House (established in 1894), is like reading a history of the entertainment industry’s most-celebrated superstars of song, dance and the performing arts. Dramatic, in fact, would fit to describe other aspects of Galveston’s history. In 1900, it was the tragic scene of America’s worst national disaster when a hurricane decimated the city, claiming thousands of lives in the process. Other storms would follow, exacting further tolls in loss. The grandeur and glory of so much history increasingly declined into a state of disrepair.

Bill Ross, the Senior Vice President and General Manager of Mitchell Historic Properties, helps explain what so many in Galveston already know. “That Galveston’s treasure of historic architecture would have all but been lost if not for the lead and example set by the Mitchell family.”

More than 30 years ago, George and Cynthia Mitchell gazed upon the dilapidated condition of Galveston’s once distinguished, downtown, and determined to do something about it. They led the charge for a historic preservation campaign modeled after a similar initiative in Savannah, Georgia, that ultimately saved so many structures which are now part of the Strand National Historic Landmark District. The Mitchell’s advocacy was augmented by unprecedented investment, to date totaling more than $175 million, to acquire, rehabilitate and restore more than 20 of the historical structures. Mitchell Historic Properties oversees management of the Mitchell-owned properties which include almost a fourth of all the buildings in Galveston’s Strand district, three hotels, and Pier 21 area along Galveston’s harbor.

According to the State of Texas’ Department of Commerce, Galveston Island is currently the third most popular destination in Texas. Mitchell’s three hotels: The Tremont House, Harbor House, and the century old Hotel Galvez and Spa are popular choices for the millions of visitors to the Island. The 1894 Grand Opera House, which Ross credits as both an architectural and acoustical masterpiece, retains its cultural significance in the community and its impressive list of performers. The Mitchell family has astutely interwoven a blend of commercial and residential developments in Galveston’s downtown area that today accommodate community citizens and a variety of business operations.  Developments over the years have included retail shops, the Chamber of Commerce offices, law offices, lofts, apartments, art galleries, a health spa and a variety of restaurants along the waterfront and in the downtown area.  The Galveston of today, which still offers ample opportunity to bask in that history of old, simply would not exist were it not for the contributions and investments of the Mitchell family.

Galveston is a hustling, bustling hub of business activity and amusement opportunities. Two state university branches, Texas A&M University-Galveston, and the University of Texas Medical Branch (Galveston’s single largest employer), as well as Galveston College, are located on the Island. Galveston is also home to world-class attractions like Moody Gardens (which boasts one of the world’s largest aquariums) and 32 miles of sparkling beaches that draw visitors from a 400 mile radius.  Add to this an interesting sprinkling of small businesses which Ross says are primarily “mom and pop” businesses that depend on tourism as well as local support, and you have a picture of the diversity and character of this charming island on the Texas Gulf Coast.

Development has not been popular with all, Ross acknowledges. “There are some that think, maybe, there’s been too much building, but if it is done properly, there is a way that we can blend old with new. We’re a family-owned company, and the family of this company cares greatly about this community and its people, so we’ve always tried to do the right thing and be careful with how we go about it.”

Ross says that care is not only imparted in preserving history, but in working with business owners to secure their future. Mitchell Historic Properties demonstrates vested interest in the success of their tenants by going as far as to advise them on business plans and offer flex lease arrangements.  Ross says that behind every business are people doing their best to provide jobs in the community and earn a living.  As much as the company values historic properties, Ross says greater value is placed on the people who occupy these beautiful buildings and are hopeful of successful futures for their businesses.

Such futures seemed almost thwarted by a recent storm, Hurricane Ike, which in 2008 directly struck Galveston and earned distinction as the third costliest hurricane to ever make landfall in the United States. The damage to infrastructure and personal lives was ultimately countered by another whirlwind of resolve, once again, from the Mitchell family. Ross says that at that time of loss, many looked to the Mitchells, and when the family rolled-up their sleeves and went to work rebuilding and repairing, the rest followed suit.

The extent of strategic planning involved in those renovations resulted once again in significant investments from the Mitchells, but have set the framework for infrastructure improvements which, in the case of another weather event, now allow for a shortened recovery time.

At 93 years old, George Mitchell is, as Ross describes, “a remarkable man.” Ross goes on to add that the entire family is remarkable, and fully devoted to the company. He says George and his late wife may have started everything, but the entire family has been involved and engaged in the work of the company, and the growth of Galveston, throughout their entire life.

George’s son, Grant, is CEO of Mitchell Historic Properties.  One of his daughters, Sheridan Lorenz, oversees marketing of the properties and is instrumental in the creation of events and attractions that create a dynamic and vibrant atmosphere in the downtown district.  Granddaughter Lori Mitchell is the interior designer for the hotel properties owned by the family. Ross says people sometimes ask what will happen at that time when the Senior Mitchell may fix his attention on developments in other divine areas, but these are speculations Ross sees fit to dismiss. “This family is very focused. There is a legacy in Galveston, and this family is very committed to this community and will continue to be so in the future.”

Workout Routine for Big Forearms and a Crushing Grip

StreetScore scores a street view based on how safe it looks...