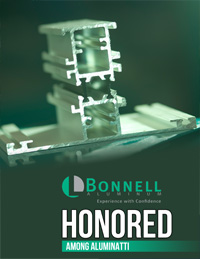 James Russell Lowell once stressed the significance of maintaining presence of mind in untried emergencies. This, he said, is when “the native metal of a man is tested.” That’s an important test of business too. For one firm, recognized as a native son and pioneer among aluminum extruders, maintaining an indelible presence in industry has included maintaining presence of mind and profitability. In terms of corporate durability, design capability and determination to deliver, Bonnell Aluminum not only passes the test, but outscores the class.

Bonnell Aluminum has been distinguished as one of America’s pioneering manufacturers of customized aluminum extrusions. With headquarters in Newnan, Georgia, and state-of-the-art manufacturing facilities in Carthage, Tennessee, Niles, Michigan, and Elkhart, Indiana, the company is comprised by a team of more than 1,300 people that specialize in the production of mill finish, anodized, painted, fabricated and thermal-barrier assemblies of aluminum extrusions which are not only critical components in construction, but also a variety of other industrial processes. From small applications up to 16-inch diameter circles with mirror-like surface finishing, Bonnell’s expertise is prevalent in a plethora of product offerings that include curtain walls, pleasure crafts, heat sinks for L.E.D. lighting, photovoltaic panels, automotive engineering and a laundry list of innovations involving walkways, windows, shower enclosures and so much more. Their efficiency in extrusions has helped enhance the aesthetic allure among an array of iconic architectural applications. The Georgia Aquarium, Luxor’s pyramid-styled hotel & casino in Las Vegas and the Philadelphia Eagles football stadium are just a few of the areas where this company’s handiwork can readily be observed.

The impressiveness of these engineering feats is augmented by an equally impressive historical footing that dates back to 1939 when William Bonnell acquired his first extrusion press. Having been raised on a ranch in Missouri, Bonnell’s early life had him saddled as a trick rider on the rodeo circuit, but he also had a particular penchant for metallurgy. During the 1930’s, after partnering in a Columbus, Ohio, firm known as B&T Flooring Company, Bonnell applied his metallurgical mastery by incorporating decorative metal trims to finished projects. He later went on to design and market a pre-formed sink frame which ultimately contributed to the development of materials essential to the construction of countertops. In fact, Bonnell was the originator of more than 500 shapes which are still in use today. In 1939, upon acquiring an extrusion press, Bonnell’s firm was the first in the industry to have their own in-house extrusion capability. Bonnell’s expertise as an extruder proved not only a blast with numerous clients, it also sparked ideas among scientists working with the U.S. Government in the Manhattan Project. Intent to discover a method of extruding radioactive uranium to develop what became the world’s first atomic bomb, the scientists turned to William Bonnell for help.

From a humble flooring contractor, Bonnell’s impact on industry would evolve over the years that followed. During the early 1950s, after becoming superintendent and general manager of Trimedge, Inc. (later known as Trimedge of Georgia, Inc.), Mr. Bonnell continued to develop new varieties of decorative moldings as well as new finishes and new product lines. By 1955, the William L. Bonnell Company emerged after he bought out the patents and trademarks affiliated with Trimedge. He went on to expand plant operations in Georgia and a sales force that penetrated into every corner of America. William Bonnell died in 1960, but the practices and processes that drove his business to become such a significant player in the industry have never ceased. The company continued to thrive as a wholly owned subsidiary of Ethyl Corporation in 1965. Ethyl opened the Tennessee facility in 1969 and later acquired an aluminum window fabricator formerly known as Capitol Products, thus furthering its leading role as a supplier to building and construction markets. By the late 80’s, Ethyl consolidated its holdings in aluminum, plastics and energy into a separate business recognized today as Tredegar Corporation, an international, publicly-traded corporation specializing in the manufacture of specialty films and coatings. Bonnell Aluminum functions as a core business unit of Tredegar.

Standing the Test of Time

In life, there is but one constant and that is change. Market demand, market forces and machinations of competition keep the best of business on their toes. Bonnell has not only successfully stood through the modern era, but is posed to make further strides in history thanks in no small part to the support it receives from Tredegar as well as from the direction from an experienced group of leaders under its President, Duncan Crowdis.

In fact, the significance of work done by this leadership team cannot be overstated when considering how Bonnell has mitigated situations that would have otherwise threatened their longevity. Successfully navigating through the deepest construction recession of our life time is a clear example of the work this team has accomplished. In another instance, several years ago, imports from China which benefitted from heavy government subsidies had grown to capture as much as 20% of America’s market. Extruders, essentially American workers, were being systematically crippled through the process. Further injury to the national industry was spared when Bonnell, along with a number of other dedicated extruders, joined forces and filed petitions with the U.S. Department of Commerce citing unfair trade practices involving China. Working with support from the U.S. Trade Commission, the team successfully maneuvered through the bureaucratic processes culminating in an ultimate decision by the Department of Commerce to apply duties to extruded product imports from China. While the team continues to fight through legal challenges, the outcome of this action is that, today, such imports are a trickle of what had been the case in 2009. “Our industry is largely fragmented, but in this case we got together and took on something we saw as a huge threat and that was bigger than any one of us,” says Crowdis. “Fortunately, at the end of the day, we helped level the playing field and avert what could have been a huge negative impact to the industry’s future.”

The recent economic downturn which led to significantly diminished construction rates posed another crisis which the Bonnell team turned into an opportunity. Granted, for a company with its range of capabilities and long-term relationships, it would take more than a downturn to thoroughly undermine Bonnell’s role in the construction game. While the company continues to be a significant player in this market, as Crowdis explains, the downturn demonstrated the risk of the company being so heavily weighted in commercial construction. Therefore, he says the recession was just hard enough to compel the company to make some hard choices about its future. In an era that prompted considerable consolidation and downsizing, Bonnell has not only continued to serve the construction market, but has also strategically moved to serve new markets through the acquisition of Indiana-based extruder, AACOA. “We knew we had to diversify as we grew and so we looked for a company with a good track record that served markets we’re not in… that had fabrication capabilities we didn’t have… that would enable us to leverage our combined capabilities to achieve market growth and diversification,” says Crowdis.

So now, beyond maintaining its role in construction, Bonnell Aluminum extrusions figure in a variety of other industrial markets. Crowdis indicates particular optimism for opportunities in the automotive industry. At present, there is a big push for light-weighting of vehicles as Federal guidelines are prompting new fuel efficiency rates to be implemented by 2025. Aluminum will be vital to these processes as it is one-third the weight of steel but for many applications can offer the appropriate level of strength required. Crowdis affirms that transportation will provide a significant future direction for the extrusion industry, including Bonnell Aluminum.

Marvel Behind the Metal

When citing the physical properties, cost-effective advantages of working with aluminum, or even the opportunities for Bonnell to penetrate into new markets, Crowdis often invokes a single word – “incredible”.

And no doubt, the aluminum extrusion industry benefits from an extraordinary versatility of aluminum as a material and the extrusion process as the way to convert the material to end products. The potential applications for aluminum extrusions are truly limitless and are constrained only by the imagination of the designer or engineer. With aluminum and the extrusion process, as Crowdis notes, there is potential to develop solutions not yet even dreamed. Rest assured Bonnell Aluminum in conjunction with the Aluminum Extruder’s Council (US industry association) is at the forefront of educating both the designers of today and the designers of the future on the benefits and opportunities of using aluminum and aluminum extrusions in their current and future design solutions. The company’s ability to produce is only outmatched by its determination to deliver. As Crowdis says, that measure of determination has little to do with machine processes or computerized communication systems. “For all the equipment, for all the technology, business is really about people… working with people, serving people, helping people, that’s what it all comes down to in the end,” says Crowdis.

He says this simple, but essential philosophy has helped Bonnell Aluminum to secure long-term client relationships as well as long-serving employees. “While some companies focus strictly on getting the next order, our goal is to develop relationships that last,” says Crowdis.

The approach to personnel is much the same. Crowdis notes that Bonnell Aluminum has prospered by “unleashing the creative potential” of the people with which it works and empowering them with a mission to serve. “Our culture has a high level of integrity, and that is important because it is the fabric of who we are. In business, you have to have trust. We’ve created a team who can be trusted, who take our business seriously, and who has no personal agenda other than helping provide solutions for our customers,” he affirms.

Quality materials from quality people striving to help other people – it’s a simple premise that not only underscores the milestones achieved by this prestigious firm, but overrides its focus on the future. “We are a large extruder with large capabilities,” concedes Crowdis. “Our vision is to be a company, which in the eyes of our customers, acts, behaves and responds to their needs like a small, regional provider that genuinely wants their business. If we can do this well, the customer experiences the best of both worlds.”

For more information on Bonnell Aluminum, visit the company website at www.bonlalum.com

Building an API in 60 seconds, without any server setup

Let’s Build a Traditional City and Make a Profit

OneNote for iOS and Mac lets you attach files

Beginner: Are you stuck in programming should not do

What happens when your carryon is over the limit